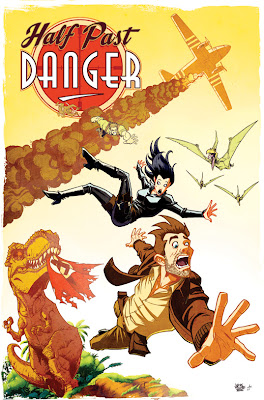 The variant cover for issue 5 comes from the fabulously talented (and flamboyant) Nickelback Roche. Nick was at IDW way back even before I was, and blazed the Irish skidmarks therein. A master of all things Transformable, Nick always shows a whole different set of chops when unleashed on some honest-to-goodness human characters, like the HPD cast.  (Or are they..? They are.)

Nick has been pulling double-duty on HPD so far, along with being one of an elite-ish cadre of variant cover artists, he's been helping out a lot on the scripting front with numerous proof-reads and many excellent suggestions. I stole a couple of his lines verbatim for my pitch for the book. You're welcome, Nick.

It'd be hugely remiss of me not to point out the amazing Josh Burcham's colour work on this piece; as usual he took what Nick did and sprinkled gold dust over it. Josh coloured my favourite Nick-related TF project to date, Last Stand of The Wreckers, and I urge anybody that hasn't read that book by this point to find that sucker and eyehale it.

And yes, to those wonderiung, I DID ask Nick would he add a teeny Grimlock to the T-Rex portion of the cover, maybe peeking out of the jungle.

He, and Hasbro's lawyers, graciously declined.

Posted by Stephen Mooney at 4:06 AM