Here's an interview I just did about all things HPD with the lovely people over at All-Comic.com.

LINK
Posted by Stephen Mooney at 4:39 AM No comments:

So, issue 6 is supposed to be on shelves today, but... isn't. It turns out that there's going to be a very short delay on the last issue, due to Jordie having to do some unavoidable juggling with her colouring schedule. There's nothing that could be done, and it wasn't Jordie's fault in any shape or form; it's down to several of her other artists being late on their books and that snowballed into our last issue.

Hopefully we'll see the issue arrive next week, as Jordie actually finished our issue 3 weeks ago (and it looks gorgeous), so it shouldn't be too long. Please bear with us, it's another 30-page monster and hopefully well worth the wait!

So I'm back from the New York show, and man, whatta blast. It was ridiculously hectic and manic as I assumed it would be, but Artists' Alley was a lovely, somewhat-tranquil bastion of peace and sanity in the middle of it all. I was floored by the amount of HPD fans that approached my table for signatures or prints. I honestly didn't expect there to be so many of them! Many people asked about the impending final issue, the hardcover and most importantly; would there be more afterwards? I was tickled by the super-enthusiastic response from readers. Yay!

I have to thank the ridiculously-generous Declan Shalvey once more for letting me share his table after Jordie had been forced to pull out due to deadline constraints. It was the best possible place to be, as I met a huge number of pros and editors that came up to talk to the ever-popular Dec. It was a networkers dream, as he introduced me to each and every one of them.

I sold most of the A3 sized prints that I had over there with me, but will get more printed up before Thought Bubble in England next month. What a show that promises to be. I'll be attending with my partners in crime Jordie bellaire and Dec Shalvey as usual, and no doubt a few of the other Irish heads will make the trip. I'll also have all of the sold-out early issues of Half Past Danger with me, and I'm sure I'll take on a few commissions too. More on that next month.

Right now, I'm finishing off the extra material for the hardcover, and looking forward to seeing peoples' reactions to the final issue of the first series when it ships. The hardcover promises to be a thing of beauty, and it's the most excited i've been about any part of the process, I think. 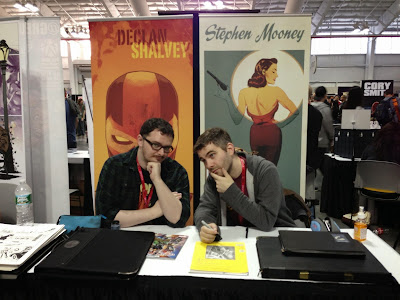 Posted by Stephen Mooney at 7:24 AM No comments:

I'll be sharing table K-11 with my good buddy Declan Shalvey (Deadpool, Conan, Thunberbolts etc) all weekend at NYCC next week. I'll have some really nice Half Past Danger Prints with me and would be delighted to sign anything you wanna put in front of me.

I'm taking on a very limited amount of pre-show commissions, probably only 2 or 3. They'll be $100 each for a 9x12 full figure inked drawing of a character of your choosing. See the pic of Elizabeth Huntington-Moss a couple of posts down for a reasonable idea of what to expect. Get in touch through email at stephencmooney@gmail.com if ye fancy it.

Thanks, and see ye there! Can't wait; always a brilliant show.
Posted by Stephen Mooney at 5:07 AM No comments:

For those in Ireland with an interest in creating a graphic novel from the ground up, this talk on Friday the 18th of Oct should be well worth your time. Hope to see ye there! 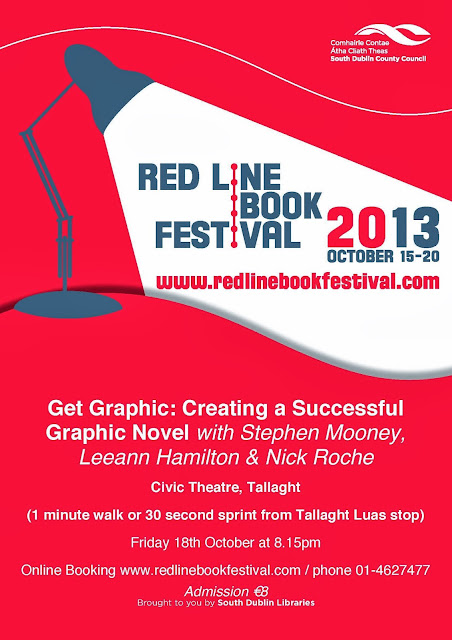 Posted by Stephen Mooney at 3:03 AM No comments: