Down to the last couple of pages to colour now. For whatever reason the colouring has taken me longer than the pencilling or inking, but that said I'm pretty satisfied with the results. Above is my take on the New York harbour skyline of 1943. I always found something incredibly romantic about all of the human stories that must have taken place in that town at that time. Something otherworldly about it all.
Posted by Stephen Mooney at 2:19 AM 5 comments:

I'll be at the Kapow convention in London this coming weekend; saturday evening and all day sunday. I'm situated at Table 167 in Artist's Alley (alongside fellow Mick/knuckledragger Dec Shalvey) where I'll be signing, sketching, and chatting about (and showing lots of unseen pages from) Half Past Danger to all and sundry. Say howdy if ye're about.
Posted by Stephen Mooney at 3:14 AM No comments:

Today I start colouring the final scene in issue one of Half Past Danger. This means that in the next week or two I'll be ready to assemble my pitch packet and punt it speculatively towards any prospective publishers out there. I certainly have a couple of preferences, but I'll keep them close to my chest for now out of pure, sweaty fear of rejection.
On the plus side, some teensy-tiny inroads have already been furrowed toward getting this thing out there, mostly down to the fact that some incredibly helpful and like-minded people have taken an interest in the project and it's genesis (they know who they are, and again, thanks guys). So more info on whom, if anyone, will be publishing the book as it comes in. It's both nerve-wracking and exciting. But far more of the former.

Back to the colouring side of things; man, do I have a newfound respect for pro colourists. It's not so much the doing of the thing, but the doing of it at speed. I'm pretty happy with how the colours have looked so far on my pages, but they're taking far longer than I anticipated. My plan going into the book was to let the work breath, ie to allow the process to simply take as long as it took. Lately though I've begun to recant on that stance a smidgen. I figured I could give myself a full three days to complete each page of coloured artwork; one day to pencil it, the next to ink it and the final to colour it. Well, I guess two outta three ain't bad. I completed the pencils and inks for pretty much each and every one of the twenty-six pages of issue one in the allocated two-day timespan. But the colours have really slowed me down, some pages taking a day and a half to colour, and some even two full days.
I realise that this is mostly due to the fact that I've never coloured interiors before. I coloured a lengthy run of ANGEL covers, but you are afforded more time with a single cover illustration(even though there tends to be more actual work involved in an interior storytelling page, at least in my experience) and in those cases spending the guts of a day colouring the piece seemed fine, nay, expected. But colouring interiors has presented a whole slew of new and challenging factors; keeping a consistent palette, day/night colour schemes for each character and setting, gradually and naturalistically segueing from one colourscheme to the next as a scene changes and evolves etc. All worthy and interesting stuff, but boy does it take time to learn to do properly. In one way, if I gain nothing else from this attempt at a creator-owned book, I'll have certainly improved my colouring skills significantly.
At this juncture, I must once again offer HUGE thanks to my good friend and colourist to the stars, Jordie Bellaire. Jordie's been kicking ass and taking names on high-profile books like John Carter of Mars, Hulk, Angel and Faith and many others in recent months. She is unbelievably good. And so, so fast. That's the most impressive part for me, the speed with which Jordie turns stuff around. It beggars belief, because from what i can tell, there is simply ZERO drop in quality, even when she has to turn entire batches of pages around in mere hours. I mention Jordie because she has been instrumental in showing me (more than) a few tricks of the trade, and her knowledge and help really has been invaluable on colouring Half Past Danger in particular. Any time I need to turn to somebody for assistance with the colouring side of the book, I'm bloody blessed that she's made herself available to me. Thanks Jordie!

So yeah; getting there. As I say I'll pop back here when I have the first issue/pitch done and dusted, and post the entire lettered nine-page preview to (hopefully!) whet peoples' appetites.

P.S.- Here's the coloured/lettered version of a panel I posted a ways back. Just for a little visual stimulation and whatnot. Plus, y'know, dinosaurs eating dudes.

Posted by Stephen Mooney at 3:37 AM No comments: 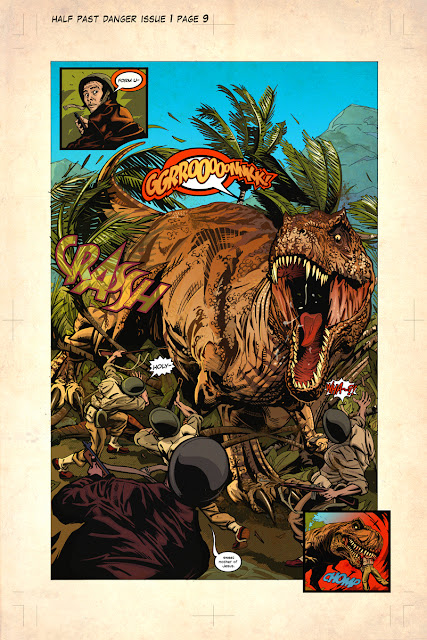 This is the last page of the preview for issue 1. Turned out to be a lengthy enough chunk of the book at ten pages(of the first issue's 26), but I figured it was the most natural cut-off point in that it's where the action really starts to kick off, and I wanted folks to be excited as to where the story would go from there.

Looking again at the past few pages I realise I've got the lettered versions of the previous two or three up, but not the rest. I'll rectify that very soon with a single post containing the entire lettered preview in sequence(all the lettering for issue 1 is already done).
Posted by Stephen Mooney at 4:05 AM No comments: