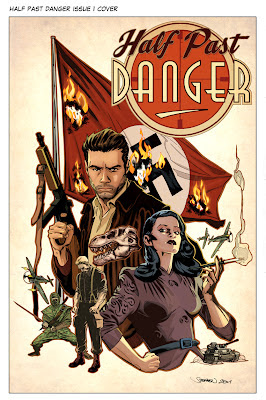 Today is officially Creator Owned Day, yet another indicator that creator-owned books seem to be currently looming large in the consciousness of the comics populace, both readers and creators. I'm delighted to embrace this fact, as this book is the first creator-owned property I've ever attempted, and I really hope/feel that it can be a big step in the right direction career-wise for me. As mentioned in previous posts, I was getting more and more frustrated at the lack of control/input in the work-for-hire realm, and working on my own story and characters has been a huge breath of fresh air. So viva la Creator Owned Day! Hopefully things like this will raise the profile of independent books in general and encourage more comics fans to stray a little from the beaten path and maybe give something else a try every now and again.

Here's the cover to the first issue with the logo included. The placement/colour scheme is still a little preliminary as I try different positions, but this is where it's at right now. I've completed the cover to the second issue too, so I'll stick a glimpse of that up here at some point soon.
Posted by Stephen Mooney at 3:59 AM

as I said on twitter it's only because of this creatorownedday that I came across this site and having read all the posts it's really interesting to see the work involved in writing and drawing something like this.

I read creator owned comics only, not by choice but because I've found they're by far the better and more original comics available. Image are currently publishing so many great titles, new and old it's a clear sign creator owned is getting more popular.

If your previews were being shown I'd definitely buy #1 to see where it took me.

I'll keep reading the blog and wish you the best of luck.

That means an awful lot, Tom, thanks so much. I truly appreciate the support. I really feel I've got something people might really enjoy here, so hearing about potential interest and support from readers really helps motivate me to do the best job possible.