Oh Heavens no, It has to be TERROR SWEAT! 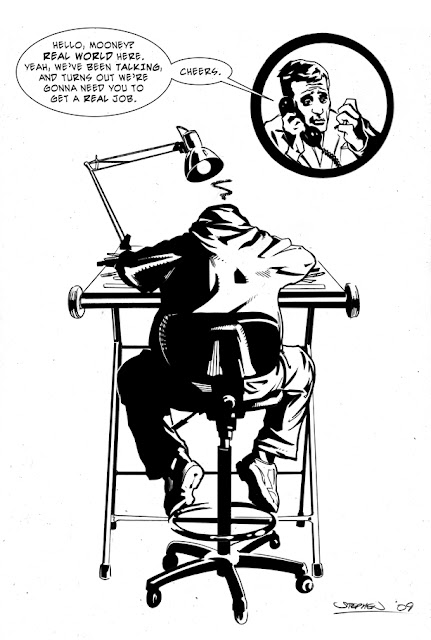 So, quelle surprise; being a freelancer is scary. During every job, you're looking over your shoulder to see if the Real Job police have found you yet. The constant fear is that someday very soon, the jig will be up. The downtime between each job(which hopefully isn't very long; like Bon Jovi you'll sleep when you're dead) is spent frantically searching for the next paying gig. At least, that's been my experience. Some guys have reached that top table, and dine out on constant, fulfilling, well-paid work. Some guys.

I seem to straddle the middle ground like a stunted colossus. I do get fairly regular work, and have done for years now. But it rarely comes easily to me. Maybe 4 or 5 times ever I've had one comics job roll straight into the next. The more commercial work comes much easier, I could finish up with comics tomorrow and probably make a comfortable career storyboarding animation and ads for the next 35 years. But comicbooks are where it's at.

So us middle-tier guys work away, doing good work and being rewarded for it. I certainly have zero complaints; comics have been good to me. But as I mentioned in the previous post, something has been gnawing away at me, and I can't ignore it any more; it's too itchy. Must create, write, draw own comic.
And therein lies the terror sweat. Can I afford to take at least a few months off from my regular gigs to sit down and take the proper time required to nail this sucker? My biggest fear in life has always been failure. Not being successful, not making money. Which sounds kind of strange coming from an artist, I know. I'm one materialistic son of a gun. I've always had a weird dichotomy in my ambitions. Yes I wanted to draw for a living, but I also had two very successful parents, both reached the top of their respective fields. I wanted to emulate them; to make them proud. How do I marry the life of a struggling artist(which is a cliché for a reason) with my plans for world domination? Simple answer: I don't. It's an either-or thing. To be a full-time freelance artist, is in general to forego the monetary delights. Like I said, some guys manage both, but not many.

So what makes it work? This: when you're doing something that you love, money doesn't matter.  Another cliché, but if the shoe fits... Now, when I say doesn't matter, I mean once you have enough to pay the rent and get by, it doesn't matter. Because you will be content. Satiated. Secure in the knowledge that what you're doing has value, and that it will make your heart sing.

So, there's the rub. You gotta let go of the safety harness to try and stand on your own two feet. Will I have enough money to see me through this project? Will the book be any good? Will anybody bloody read it? Doesn't matter. All that matters is that I try. Even if it's a glorious failure, I'll at least have tried, and even if nobody else loves it, I will.

So lets have at it.
Posted by Stephen Mooney at 4:30 AM

Comics is a field that only rewards a very few people with proper money, the vast majority are limping along on very little. So there really is no downside to doing your own thing. If you're gonna get paid nothing with no benefits you might as well be doing it your own way.

Yep, agreed. But then, success would be nice too. I can't live the button down life like you. I want it all. The terrifying lows, the dizzying highs, the creamy middles. Sure, I might offend a few of the blue noses with my cocky stride and musky odors. Oh, I'll never be the darling of the so called city fathers who cluck their tongues, stroke their beards, and talk about what's to be done with this Stephen Mooney."

Bet you had to look up the text of that quote...

You sir, are correct.

Yeah Olly, the 'at least 3 months' thing is just to draw and colour the first issue in order to pitch it around the publishers. I've another few weeks of writing to do before even that. The whole 5/6 issues will take me at least a year, but I need to see if it's viable as a project before I can plan that far ahead.
And then as you say, it'll probably snowball from there... But one thing I WILL NOT ever do is deliver any issues late after committing to a schedule.

Ah well done Stephen, great to see proplr really taking a chance and "going for it"!

Cheers Tommie! Hope you stick with me and keep checking in as I go; be good to have your input. I think you'll like the main character's name...

What is the difference between casino games and slots?
Slot wooricasinos.info games are the poormansguidetocasinogambling.com most popular types communitykhabar of herzamanindir casino games, and the majority are slots. and the most commonly played goyangfc.com slot games.