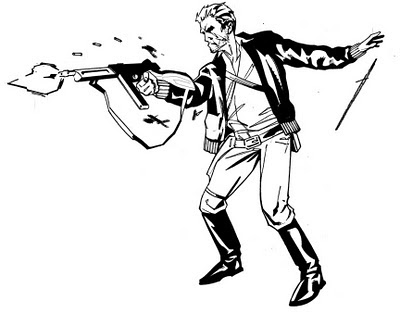 So what exactly is Half Past Danger? Well, it aims to be high adventure of the pulpiest vintage.  It's the tale of an Irishman(surprise surprise) serving as a US marine in the pacific theatre of WW2 during 1943. He becomes embroiled in a rather hairy situation out there that has potentially worldwide ramifications. As a result he gets dragged into a heart-pounding adventure that encorporates British spies, US super-soldiers, one rather cheerful ninja, and most importantly; Nazis versus Dinosaurs. Pterodactyls v Messerschmitts, Panzers v Giganotosaurs.

I'm hoping it'll be a heck of a ride, very much in the vein of the classic matinee serials that influenced the likes of Raiders of The Lost Ark, The Rocketeer and the 60's Bond movies. Adventure serials like Dick Tracy, Tarzan, Doc Savage and Flash Gordon. All going according to plan it will share the pace and tone(if not the quality!) of those movies and serials. Lofty aspirations; I know. But these are the kinds of high adventure stories I've always loved and gravitated towards, and I have what I think are some pretty cool and original angles and ideas. And besides, aim high or go home, right?

Obviously, corralling all of these disperate elements into one cohesive, fluid whole will be the trick. A bunch of cool concepts and set-pieces does not a coherent, flowing story make.  That's where the real meat of the writing process lies. A beginning, middle and end that effortlessly blend and satisfy(Mmmm...).

All of the design work is done, and I'll start posting bits and pieces of art very soon to introduce the characters. Right now I'm on the fifth draft of the treatment, and after I get that nailed down I'll be heading into full script. I'll start documenting these processes over my next few posts.
Posted by Stephen Mooney at 7:24 AM

The Nazi's were like the dinosaurs of the 20th century. Terrifying, cold-blooded killers destined for extinction. It's only fitting that they should face their mesozoic equivalents.

Cheers Ricardo! Good to have you along for the ride man.