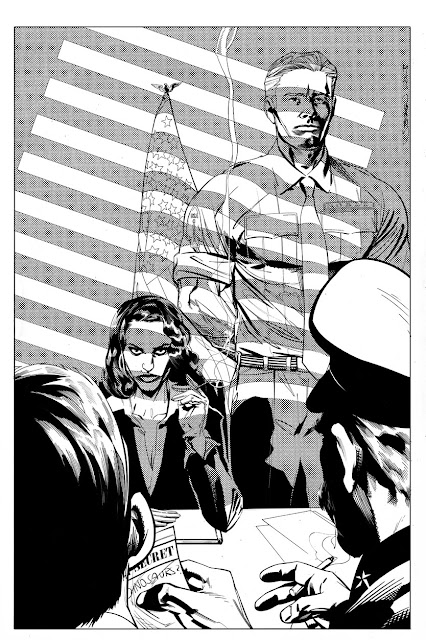 As I stated somewhere a few posts back, working on your own book like this really affords you the chance to simply draw an image that might pop into your head at any given stage. Well, assuming you've had literally a year of lead-in time... I had this image in my noggin of the briefing session that must've taken place between Elizabeth, John and the brass where she's pitching the recon mission to the island, and figured it could be a cool piece to get down on paper. Happy enough with this one, it looks pretty much exactly as the image in my head looked, something which is very rare, annoyingly.

I guess some of the aspects of this project that I've been most pleasantly surprised by have been the instances where I simply put the page of the day aside, and drew something for pleasure. Don't misunderstand, it could be argued that this entire series has been done on somewhat of a whim, but I'd be lying if I said it was a rapturous fountain of nerdgasms from start to finish.

The point is that I NEVER used to draw anything simply for yuks; I just didn't have any time to. The daily grind of a full page of pencils and inks a day (sometimes two pages) meant that there simply wasn't any time left in which to doodle for the sake of it. It could well go right back to that scenario after HPD if I end up back on similar projects, and that's utterly fine, but it's nice to take the moments to indulge myself here and there when they present themselves on this series.

Also, I'm sure all of this artwork will wind up with a proper and specific use in the book, be it a chapter-heading or bookend or whatnot. Fun!

Posted by Stephen Mooney at 4:54 AM

Ah cheers man. Just heard the nice things you said about the book on the 2D cast. Yer alright, so ye are

See Table 1.10 Occupational separations and openings, projected 2020–30, U.S. Bureau of Labor Statistics tasks an annual common of 15,200 job openings between 2020 and 2030. 43) For Bus and Truck Mechanics and Diesel Engine Specialists, the united states Bureau of Labor Alarm For Car Statistics tasks an annual common of 28,a hundred job openings between 2020 and 2030.