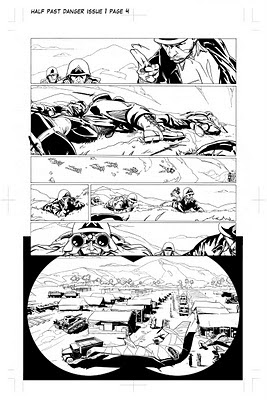 Here's page 4 of issue 1 (sorry about the randomness of the page sequences so far, the coloured, lettered pages shall definitely be posted in proper chronological order). In this sequence the marine squad stumbles across a hidden Nazi base camp, where you can see my most blatant nod to Raiders yet, the Flying Wing. The plane used in Raiders of course wasn't actually a real Nazi design, Raiders production designer Norman Reynolds designed the plane purely for the film, based on proposed Nazi 'Flying Wing' projects of the time, specifically the Northrop Corporation designs and drawings for the Horten Ho-2-29, which was to be Hitler's great secret weapon, a stealth plane that could avoid the Allies radar.
So I figured, in for a penny, in for a pound! Was lots of fun to draw.
Posted by Stephen Mooney at 5:03 AM